The Miracle Worker and the Transcendentalist 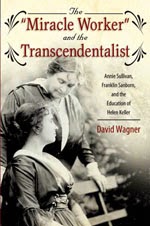 Anne Sullivan, Franklin Sanborn, and the Education of Helen Keller

Helen Keller and her famous teacher, Annie Sullivan, up to the present have consistently appeared near the top of lists of best-known American women. But few Americans know much about the history of how Anne Sullivan, once a pauper in a large Massachusetts poorhouse, came to her role as the “miracle worker” who taught the deaf and blind Helen Keller. Nor do most contemporaries know how controversial the education of Helen Keller by Annie Sullivan was in the late nineteenth and early twentieth centuries. Leading philanthropists, for example, attacked both Sullivan and Keller for more than twenty years. Portraying the contrasting lives of Sullivan and Franklin Benjamin Sanborn, the era’s prominent transcendentalist, abolitionist, and founder of many national organizations, this book sheds new light on the ethnic and religious tensions that haunted the notoriety of Sullivan and the gender and disability expectations that affected the public reception of both Sullivan and Keller. The book places into historical context the Anglo-Saxon reformers exemplified by Sanborn who, on the one hand, saved Sullivan from the poorhouse, but who ultimately could not accept Sullivan’s hero status. While highlighting the story of Sullivan, Keller, and Sanborn, Wagner also seeks to shed light on the Gilded Age and Progressive–Era America in which battles over class, ethnicity, gender, and disability were fought by both genteel—and by more belligerent—means.
Book Link=> http://www.paradigmpublishers.com/books/BookDetail.aspx?productID=280260
Posted by Unknown at 12:20 PM