Hello everyone, it’s time to take an author interview and today Author Izzy Church is with us. We are interviewing her for her book "Dr. Pookie and the Case of His Missing Thought", which launched on February 20, 2017 by Square Monkey Publishing.

SO,
1.    When did you first realize you wanted to be a writer?
Ans. => I’ve been storytelling since my early childhood. I would write little plays and perform them with my friends. So, actually, the art of storytelling fueled two of my passions: acting & writing. As a teenager, I was offered an opportunity to pursue acting with a well-known agency in NewYork. For several years I concentrated on performace, but soon I realized something was missing in my life and that was the art of storytelling. Therefore, I pursued a higher education in communication arts with a specialiazation in writing for film and television. The two art forms motivate me and keep me passionate about my craft. 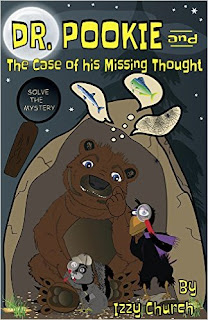 Ans. =>The process of both writing and illustrating, Dr. Pookie and The Case of his Missing Thought  took around a year. I tend to write the first draft of a story months before or sometimes even years before I sit down to complete the book, which I call the gestation period. I believe in that tried and true statement: If you love something, let it go. If it returns, it’s yours. It might sound corny, but it works for me. If I find a story is calling me back, then I know it’s ready and it’s worth dedicating the next six to eights months of my life.

3.    What is your work schedule like when you're writing?
Ans. =>I set up a consistent writing schedule. The whole idea is not to break the chain. Therefore, I write everyday…sometimes it’s for an hour and other days I write all day long. I find that the key to completing a book is being persistent. There will be days that you want to throw in the towe, but more than likely, you probably just need a break. So, don’t force the writing. If you find yourself staring at a blank page, write anything and then walk away. I believe writing can be compared to an athlete running a marathon. The athlete trains everyday with the intention of seeing themselves cross the finish line. It is much the same with writing a book, the only difference being that your goal is to see yourself holding a completed copy of your book.

4.    What brought you to write this book?
Ans. => I wrote a rhyme about losing my thought a few years ago; it was no more than four or five lines, but I thought it was so cute that I turned it into a book.

5.    How you become a published author? Any inspiration?
Ans. => Several years ago, I held a reading of a screenplay that I wrote and deceuded ti invite“Industry” to attend. The screenplay was well received by audience members and Industry folks alike thus,  it resulted in me creating a connection with a publisher.

6.    Where do you get your information or ideas for your books?
There are so many ways to generate ideas for a good story. I like to do warm up exercises like: writing stream of consicousness, improv to paper, and or skimming through magazines for articles that I can turn into a story. These exercises help, so that you are ready when inspiration strikes. Ultimately, you need to feel connected to the story your writing, but the exercises can help you to generate ideas that wil trigger you to write a compelling and entertaining story.
7.    Ans. =>When did you write your first book and how old were you?
Ans. => My first book was a lol film-industry romantic comedy novel titled, Angry Movie Guy. It launched in February of 2016 and now I’m in pre-production for the script-to-screen version of the film.

8.    What do you like to do when you're not writing?
Ans. =>I love acting and Improv. I work with a fun group of actor/improvisors and we perform at NYC venues. I also love art. I paint and draw all the time and exhibit my work with other talented artists in NYC. I’m actually co-curating two great shows right now: No More Black Targets and Street to Tower with the World trade center.

9.    How many books have you written? Which is your favourite?
Ans. => This is only my second book, so I’m not ready to choose a favorite.

Ans. => I’m working on another novel titled, My Beautiful Neighbor and a children’s book is brewing titled, Queen Bee.  I’m also working on a television pilot with a co-writer, which we hope to produce in 2017.

CLICK HERE to visit the amazon page.
Posted by Unknown at 12:23 PM