Hello everyone, it’s time to take an author interview and today Author Tal Klein is with us.

Ans. => I think pretty much as soon as I was able to write. My parents tell me I preferred writing stories to watching TV. I was a strange kid.

Ans. =>I had mulled and researched the topic for about four years before I “put pen to paper,” but once I actually began writing it took almost exactly one year from start to finish.

Ans. => It’s very chaotic and opportunistic. I have a full time job and a young family, so every single word is written on stolen time. Late nights, early mornings, airplanes, hotels – Whenever I could sneak a second, it went to writing. 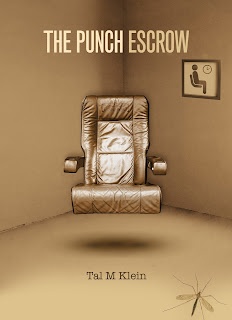 Ans. =>There were a couple of catalysts for writing this book. First, about five or six years ago, I had one of those non-sequitur water cooler chats with the CEO of the company I was working for at the time. We discussed teleportation and he explained that teleportation was actually an asynchronous replication technology, not a transportation technology. That blew my mind. Then, a few years later, my daughter Iris became a published author when she turned five. She wrote a kids’ book called “I’m A Bunch Of Dinosaurs.” One day she asked me, “Daddy, when are you going to write your book?”

Ans. =>I’m not published yet! But hopefully with the support of your readers, The Punch Escrow will see the light of day. Like many first time authors I struggled with the best publishing path for my book. I have friends who are publishers and published authors, and everyone seemed to have their own spin on things. I had recently supported a friend’s successful Inkshares campaign, and the process seemed incredibly positive. I was approached by a publisher, but the terms they were offering were not that great, and they were not willing to compromise on things like creative control and editor selection. I’ve been very happy with Inkshares. It’s a great platform and a very supportive community of authors.

Ans. =>I’m very fortunate in that I have some very smart friends in the fields of physics, biology, politics, law, religion, and philosophy. Since you asked about science, I’ll give you an example: I have a friend who’s a physicist. In the book, humanity solves for air pollution by genetically modifying mosquitoes into steam reformers (devices that convert one toxic fumes to air). So I needed to know how to turn a mosquito into a flying steam reformer. I called my friend and he explained that it’s possible, but would require a wake transducer that would reclaim the kinetic energy generated by the mosquito’s wings. Then it was up to me to take that information and make it readable and enjoyable to someone who wasn’t a professional physicist.

Ans. =>The Punch Escrow is actually my second manuscript. I nearly published my first at the age of 22. It was a collection of satirical essays titled “Confessions of Ron Jeremy’s Hypothetical Love Child.” I had a book deal with a well known publishing house but they wanted me to convert the book from a collection of essays into a first person narrative and it didn’t work out. Fast forward a decade and change, I read Ernie Cline’s Ready Player One and Andy Weir’s The Martian back to back and thought to myself, this is my voice, these are the type of guys I would hang out with, and their books are best sellers, so maybe the world is ready for my voice. Also, my young author daughter, who I mentioned before, kept prodding me to publish something because in her mind it was “my turn.”

Ans. =>I love hanging out with my family and composing music.

Ans. =>Technically I’ve written two books, but I’ve abandoned the first, which would make The Punch Escrow my favorite.


Ans. =>Right now I’m just trying to get The Punch Escrow published. The book is intended to be self-contained. There are like three “big questions” at the end of the book, each of them would be great nuclei for a book, but I’m not counting my chickens before they hatch.