Hello everyone, this is an interview time and today Clare de Lune is with us...

1.   When did you first realize you wanted to be a writer?
Ans. => I came to the realization early on, around age 7 or 8. I had my first short story published at age 11, and that sealed the deal for me. I started reading early, around age 2 or 3, and my mom was really obsessed with these John D. MacDonald books. She’d read them aloud to me, along with parts of Stephen King books because I’d annoy her with questions about what she was reading. It wasn’t long before Istarted sneaking into her room and reading them for myself. 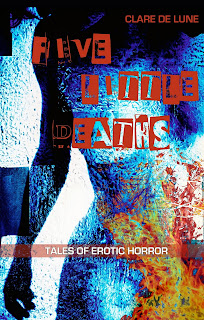 2.   How long did it take you to write this book?
Ans. =>Since Five Little Deaths is a collection of short stories, it’s hard to say. I wrote the first one back in 2006 and never got around to sending it out to any zines, so that’s what inspired the collection. I had these short stories sitting around, so I combined them into a collection and self-published it.
3.   What is your work schedule like when you're writing?
Ans. => I have a full time job as a librarian during the day. In the mornings, though, I scribble in a journal—just some general thoughts, or if I’m lucky, a few lines of fiction. I come home from work, go to the gym and cook dinner, then write in the evenings. I aim for at least 1,000 words a day, but I’m looking for ways to bump up my word count. I usually write every single day.

How did you become a published author? Any inspiration?

Ans. => I’d say I’ve been writing seriously since I was a teen, but I was always shy about sending it out into the world—I’m a pretty shy person in general, but what inspired me was meeting an already established horror writer who pushed me to start sending out my stuff. I had my first horror short story, “Annabelle and I”, published in The Horror Library way back in 2006. I quit my job in 2009 to become a full-time writer, which included lots of erotica.

5.   Where do you get your information or ideas for your books?
Ans. =>By observing people and imagining what they’d do. I find myself constantly analyzing everyone’s idiosyncrosies and making conclusions about what kind of person they’d be. I also tend to be a sounding board for a lot of people, it seems—I get approached by strangers fairly often, and they always seem to want to tell me their life stories.

6.   When did you write your first book and how old were you?
Ans. =>I’d say Five Little Deaths counts as my first book under my real identity, but I wrote a few erotica collections under a pen name when I was in my late twenties. I just finished a novel titled What Lies Within, and readers can get an idea of what it’s all about if they pick up a copy of Five Little Deaths—there’s a short story in there that gives an introduction to two serial killers, Sophia and Paul. What Lies Within will soon be published by Caliburn Press.

7.   What do you like to do when you're not writing?
Ans. =>I read voraciously. I also paint a little and love to play pool, go to the gym, and be out in nature.

8.   How many books have you written? Which is your favourite?
Ans. =>Besides Five Little Deaths, I’ve written a novella, Second Skin, and a full-length book, What Lies Within. I really liked Second Skin, a story about a model who goes down the wrong path, because it was hard to write. I wanted to make the main character a bit transparent and two-dimensional on purpose, which was a challenge. I think I pulled it off and it works well within the story.

9.   What's next for you? What are you working on now?
Ans. =>I’m working on a book about crow shapeshifters and an immortal human who can talk to the Grim Reaper. It’s called Black Feathers Falling and so far, I’ve really enjoyed writing it.
Amazon Link => https://www.amazon.com/Five-Little-Deaths-Erotic-Horror-ebook/dp/B00GNEZU02/ref=sr_1_2?ie=UTF8&qid=1473529672&sr=8-2&keywords=five+little+deaths
Posted by Unknown at 10:01 AM